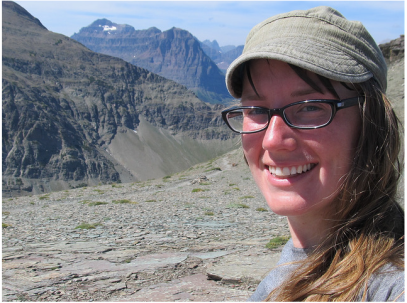 We were thrilled to feature Rachel’s story, “Pass Slipped Stitch Over to Decrease,” in our first issue. Rachel earned her MFA at the University of Washington where she was a recipient of the Eugene Van Buren Prize. Recently, she’s served as the book expo coordinator for the APRIL Festival in Seattle. You can read Rachel’s most recent publication over at The Future Fire.

What is your favorite place to write in/at?

Up until recently, it was my kitchen.  I’m not much for cooking, so it was relatively uncluttered with utensils or food ingredients and also quite sunny.  I’ve moved and haven’t found a new spot that I like as much.

We love the way your story explores connections between knitting (a pastime is often thought of as very domestic) and mountain climbing (something tends to be considered pretty adventuresome and wild). What gave you that idea? What made you want to write a story drawing these two seemingly disparate activities together?

I wrote about knitting and mountaineering because I do both things myself and I’m always noticing how similarly technical these activities are, in addition to their shared reliance on knots and friction.  For example, in climbing, you often use one rope–plus belay devices, pulleys and other tools–for safety under normal circumstances as well as to set up rescue systems when things go wrong.  Knitting is not that different.  You have a set of needles and a few other tools (tassel makers, stitch holders, etc.) that you use to turn a skein of yarn into any number of things.  Also, in both cases, you can undo the whole system and return it to being just a coil of rope or ball of yarn.

Did the artwork or the story come first? What did the process of creating a multi-genre work look like for you?

Nearly all of the artwork is based on photographs, most of which were taken by me before the story was written.  However, though the drawn images definitely happened after the last draft was completed, I tend to visualize scenes and settings vividly while I’m writing (and try to capture what I see, though often not as successfully as I would like!), so it seemed natural to add illustrations–and expand the world within the story a bit through them.

If you could spend one day as any plant, animal, or non-human organism, what would you be?

A ponderosa pine or madrone tree